Colts Neck is a community in Central New Jersey, located within the New York metropolitan area. Many people choose to move to Colts Neck due to its open space and proximity to the Jersey Shore, while still being within commuting distance of New York City and, to a lesser extent, Philadelphia. The township’s strict zoning ordinances have long kept out urban development and chain stores, allowing for locally owned businesses, while still being close to malls, movie theaters, and other amenities in neighboring communities.
The township has a Farmland Preservation Committee which to date has preserved nearly 1,000 acres of land, providing one way in which Colts Neck has been able to prevent large-scale development.

Originally a farming community, Colts Neck has long been known for its large number of equestrian farms. From the 1950s into the 1970s many of Colts Neck’s heavily wooded areas were developed with large colonial and ranch-style houses on acre-sized lots. In the 1980s and continuing into the 2000s much of the town’s farm land has been replaced with large houses, mansions and sprawling estates, although a large number of equestrian farms remain. During this time period increasing home prices in northern New Jersey and New York City resulted in large numbers of people moving to central New Jersey, causing real estate prices in Colts Neck and surrounding towns to rise considerably over the course of the two decades.

Both, true Jersey girls born and raised, we have a thirst for adventure, tackle challenges head on, have huge hearts for our clients and all animals, and are passionate about helping others find their happy place.

Never miss a thing in and around Central New Jersey.

Let us keep you in the loop. Get fun, upcoming events delivered to your inbox weekly! 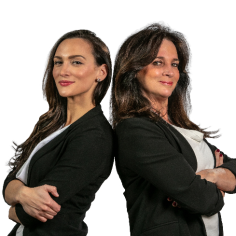